Ecuador is undeniably one of the most geographically diverse countries on the planet, making it home to some of the most mind-blowing arrays of habitats, landscapes, and species in the world. Regardless of its relatively small size, the nation hosts about 10 percent of the world’s biodiversity.

This means in all four distinct geographic sections (the Galapagos, the Amazon Basin, the Sierran Andes, and the Pacific Coast), there are incredible wildlife charm and beauties that should be in the bucket list of everyone who visits the nation.

To give you a better understanding of wildlife you can find in all four regions of Ecuador, I’ve divided the next section into 3 categories, i.e.

Without further delay, let us skip to the main section of the post. 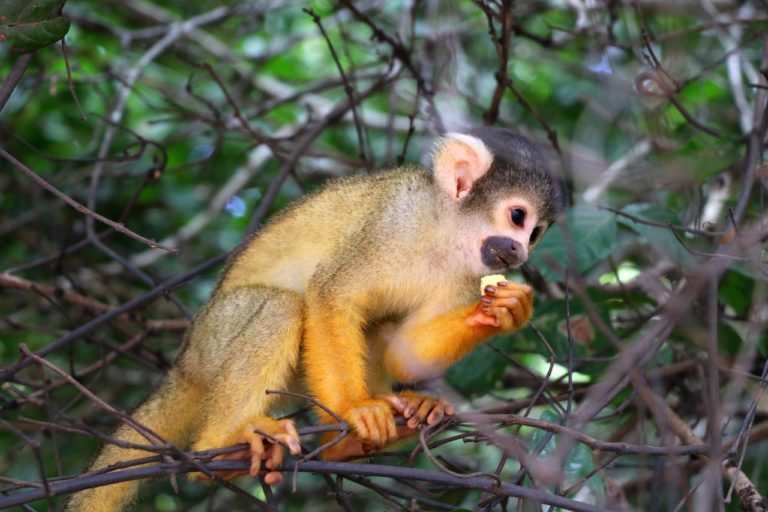 For most, one of the most amusing mammals to spy on are the monkeys. Ecuador’s monkey species include marmosets, tamarins, squirrel monkeys, capuchin, titi, wooly, spider, and howler.

The best sites to see all these species in their natural environment include Parque Nacional Yasuni and Reserva Produccion Faunisica Cuyabeno in the Amazonian lowlands. You can also find them at the rarely visited lowlands regions of Reserva Ecologica Cotacachi Cayapas close to the coast.

A group of surprisingly mischievous capuchin monkeys has taken over the central plaza in Misahualli (the Oriente town), where you are guaranteed a too personal and up close experience. In the Oriente, you may also hear howler monkeys even prior to setting your eyes on them: the males’ unnatural roars can travel long distances and can sound like anything from wind moaning spookily through the trees to a babies crying. 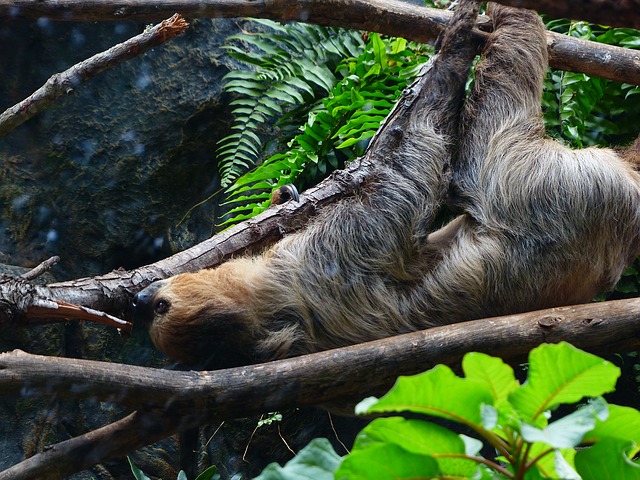 Actually, you’ll get to see two different species of sloths; the nocturnal two-toed sloth and the diurnal three-toed sloth. You’ll most likely come across the latter while trekking through the Amazon.

You’ll usually find them either hanging motionless from tree branches or moving at an excruciatingly slow speed along a tree limb toward a specific moist bunch of leaves, which are its main food source.

Leaves digestion usually takes several days, and as a result, sloths defecate only around once a week. They’re also particular with their toilet habit, always climbing down their trees to deposit their weekly bowel movements on the ground.

This is dangerous for the sloth as it can easily get attacked by a predator on the ground, but why they still choose to go through all the trouble remains one of the biggest mysteries of mammalian life in the tropics. 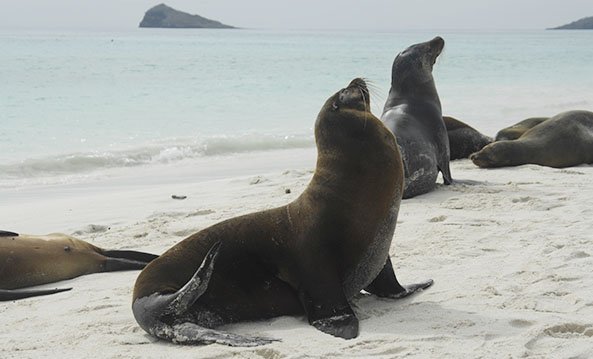 Usually confused with the Galapagos Sea lions, this Galapagos Fur Seal is way smaller and less commonly spotted. Their dense fur varies in color from light gray to dark brown color, and females are smaller than male. 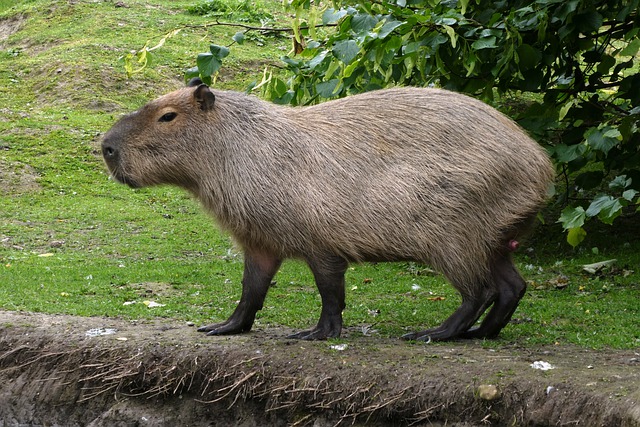 While springing through the forest along the tracks below the canopy, you’ll find the Capybaras (also the largest rodents in the world) sticking close to the water bodies. During the day, these mammals avoid the heat by relaxing in motionless water bodies. They can also stay underwater for 5+ minutes in an effort to avoid large predators. 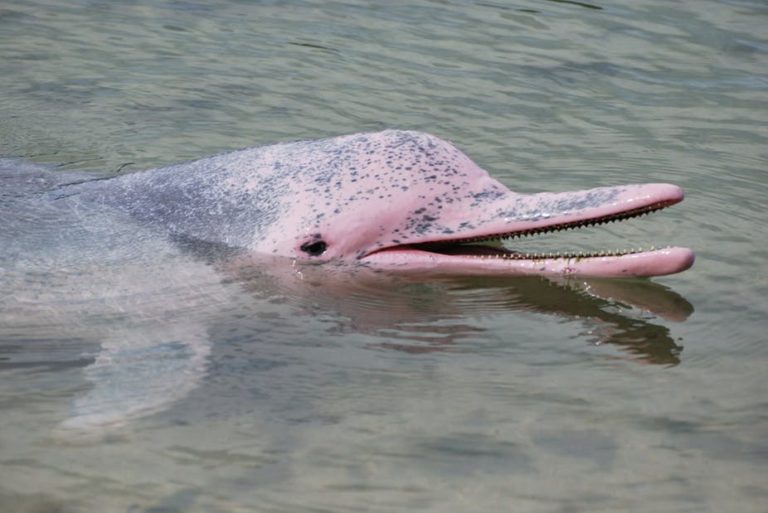 You’ll find Pink River Dolphins in the peaceful river ways and peaceful lagoons during trips by canoe on Amazon Tours. They usually travel in groups, and surface all together with slaps on the water surface before diving below again in search of fish. 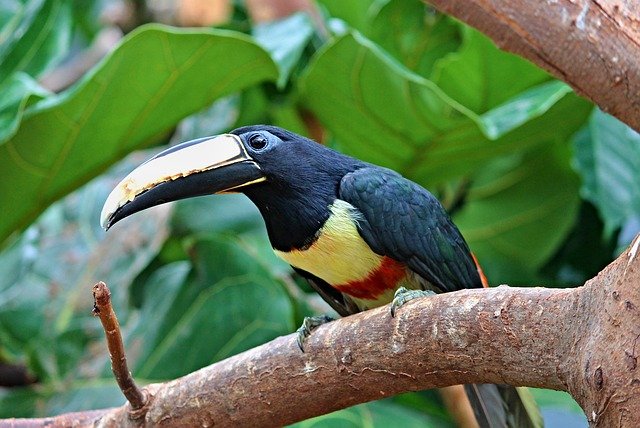 This bird is a member of the Toucan family. The Banded Aracaris hasn’t been deeply studied by naturalists, but they’re a beautiful bird species worth your admiration. They also boast yellow and black stripes, which is the origin of their name.

Their most unique character is they digest the fiber found on fruits, then regurgitate the seeds. 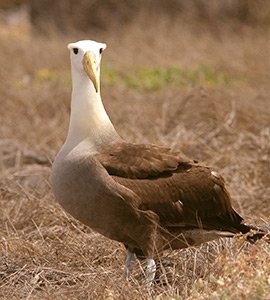 This sort of Albatross will only go to the Galapagos Island if it’s the mating season, but throughout the rest of the year, you will find them mostly on the coast of Ecuador.

The Waved Albatross also builds its nests on regions of lava using thick brush and boulders. If you are lucky during your trip, you may see the bird’s exceptional courtship procedure that has only been witnessed by a handful of people. 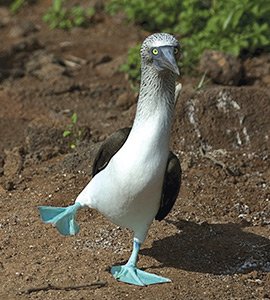 This mesmeric bird is, in fact, native to the Pacific Ocean, but you’ll find that it regularly lands on the Galapagos Islands. In addition, this species of booby boasts beautiful, bright blue feet, a white head, and brown wing feathers. The contrast will leave awe on your face.

They also have mad dancing skills, which you’ll be lucky to catch if you visit during mating season. If you time your trip just right, you will also see the blue-footed Booby nesting (which makes it easier for you to take photos) or diving into the water to catch food. 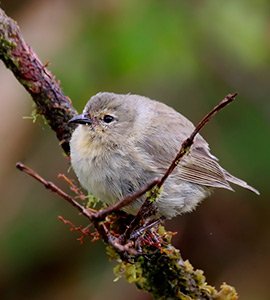 This type of Passerine bird boasts an extraordinarily unique beak, and just like the tortoises (we’ll talk about them in a few) was a key inspiration for Charles Darwin’s “Theory of Evolution.”

Prevalent in the Galapagos, you can see this small bird on most of the islands and it boasts a very short beak with attractive brown and gray plumage. On your trip to the islands, ensure you carry your camera zoom lens (or your binoculars) to spot these tiny birds. They’re a bit too tiny for your naked eye. 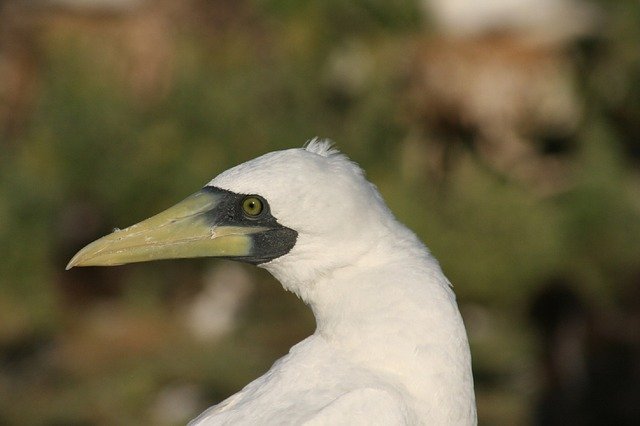 The Nazca Booby, formerly regarded to as a Masked Booby because of its excess facial patterns, is well known for committing siblicide.

The bird lays two eggs, but the oldest sibling usually kills the youngest. Then, the surviving chick encourages its mom to regurgitate meals of fresh fish they caught by diving into the water with unbelievable velocity and speed. 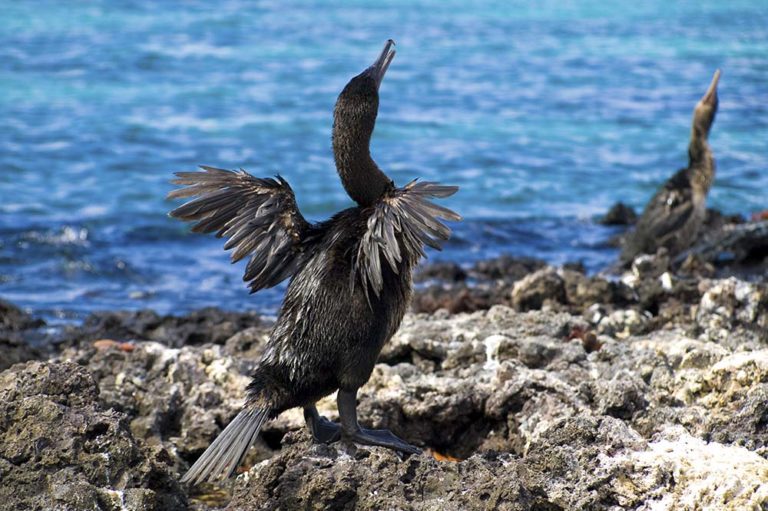 The Flightless Cormorant ranks high around the world as the rarest bird species on the planet; with less than a thousand left in the Galapagos Islands.

It’s an odd bird, with brown and black feathers, growling voices, turquoise eyes, and wings around 1/3 the size that’s needed for the bird to fly.

Their feathers are also not waterproof, so they’ll spend lots of time drying them in the sunshine. 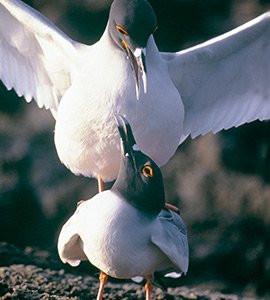 Besides being the world’s largest gull, this bird species is mostly found in the Galapagos Islands and is deliberated to be the rarest gull on the planet.

The Lava Gull boasts a light gray plumage and a gorgeous black head and stands as tall as 55 centimeters. This bird species was first spotted on Santiago Island, but you can also find it on Genovesa, Isabela, and Santa Cruz. 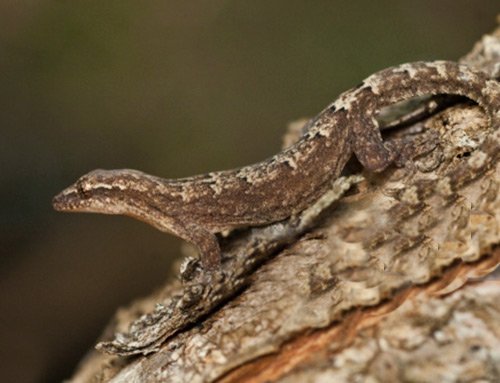 You can spot these colorful creatures beside turtles resting on rocks, logs, and shores of the tributaries of the Oriente. 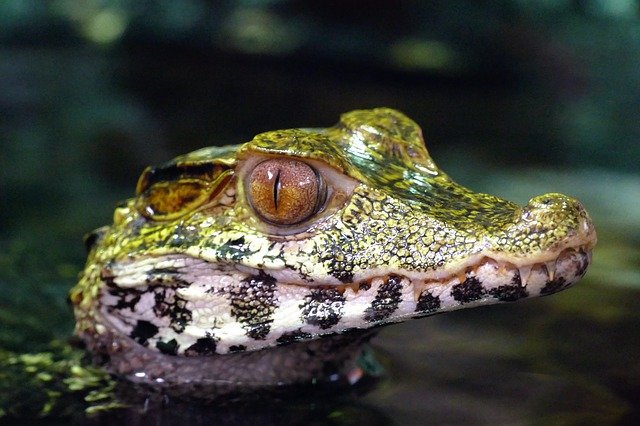 Ecuador is home to four different species of caimans, crowned dwarfs, black, brown, and white. They’re a night-time animal, usually spotted after dark along the banks of the muddy rivers of the Amazon jungle. The black caiman is the largest predator in the Amazon as it can grow up to 20 feet in length.

It also feeds on insects, birds, and small mammals. 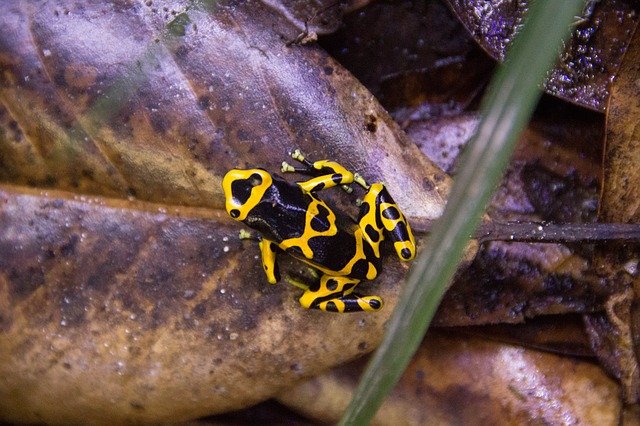 A majority of Ecuador’s 460+ species of amphibians are frogs. You’ll even find tree frogs that spend their whole lives in trees but lay their eggs in water inside bromeliads. Bromeliads are a type of epiphytic plant.

The worryingly named “poison dart” frog is also available in Ecuador. The shades of this frog species range the spectrum from neon green with black wavey lines to bright red-orange with jet black spots. Certain poison dart frogs boast skin glands that exude toxins that can easily cause death or paralysis in animals as well as humans. So watch out for such frogs. 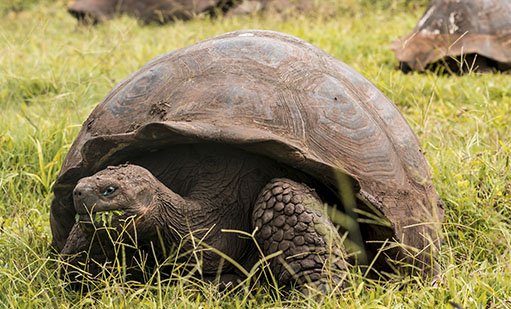 Galapagos Tortoises can live to more than 150 years, and they have played a key role in shaping the history of the Galapagos Island. In the 1970s, they were nearly hunted to extermination, with their number dwindling to around 3,500 at the time.

That said, they were also the main influence on Charles Darwin’s Theory of Evolution: Primarily because tortoises from distinct islands varied massively in appearance and size, suggesting there was a hereditary variation to their respective environs. 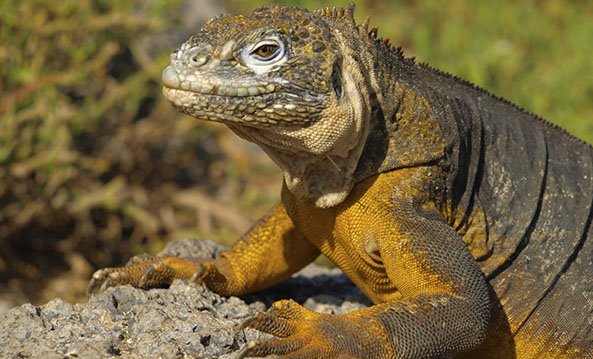 The vibrantly flamboyant Galapagos Land Iguanas are perhaps one of my favorite animals on the Galapagos Island.

Darwin once stated that “they’re ugly animals, of a brownish red color above and a yellowish orange beneath, giving them an exceptionally absurd appearance from their low facial angle.”

But I love their antique brand of oddity, from the razor-sharp claws on their massive feet to the punky spiked on top their ostensibly grinning faces. 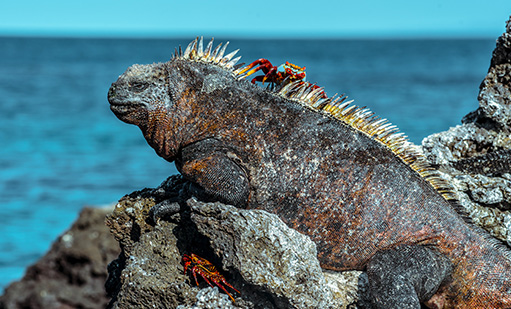 Ever since I set my eyes on them, I’ve always thought the Galapagos Marine Iguanas look a lot like Godzillas, sneezing and hissing to expel excess salt through their nasal glands. You can find them huddling together in clumps in an effort to warm themselves on lava rocks.

They also differ significantly from island to island in terms of color and size.