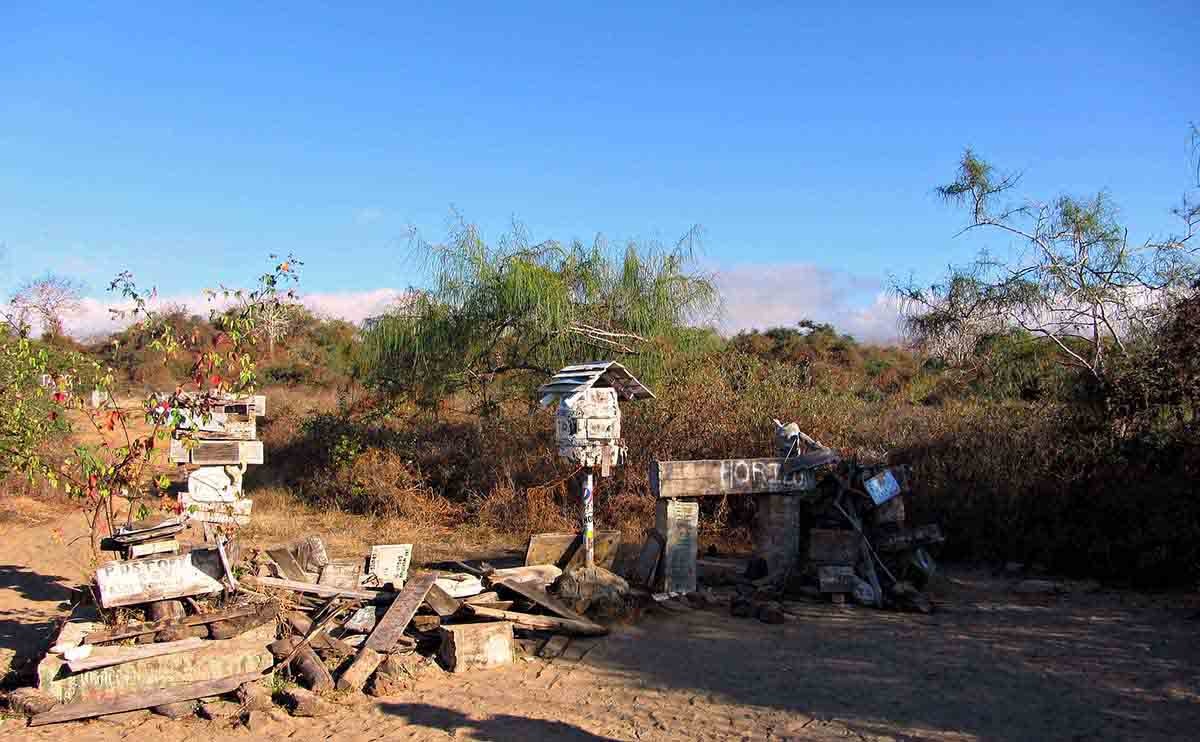 An abandoned Irishman is considered the first settler in the archipelago

Curious about the human history of the Galapagos? At the beginning of the 19th century, an Irish sailor was abandoned on Charles Island (Floreana), his name was Patrick Watkins and he is considered to be the first inhabitant of the Galapagos Islands.

He cultivated vegetables, which he traded to the whalers for rum and several years later managed to obtain a boat and recruit a few men which he took to sea in hopes of returning to dry land. Strangely he arrived at Guayaquil alone and then went to Patia where he convinced a mulatto woman to accompany him back to the island. He spent the rest of his days in prison after being arrested while trying to steal a ship.

Kurt Vonnegut and other mussings about Galapagos prehistory

Based on the ancient archeological remains found in the Ecuadorian coast, it was said that the land was first inhabited by sailors who arrived on floating crafts called “Balsas”. They used sailing techniques to move far out in the sea and perhaps arrived at the Galapagos Islands. However, there is no trace of their permanent settlement there, which leads to the conclusion that all those trips were possibly accidental trips.

There are speculations about the Inca culture, making an early journey to the Galapagos Islands in 1400. The Enchanted Isles were first discovered by Spanish Fray Tomás de Berlanga, who was the fourth bishop of Panama. He sailed first to Peru to resolve a clash between Francisco Pizarro and his lieutenants. But the diminished winds drifted the vessel off track, making the parties reach Galapagos on March 10, 1535. A study was conducted by Arne Skjølsvold and Thor Heyerdahl in 1952; it was conducted on the basis of the artifacts and remains of potsherds found in numerous sites. The study suggested that these islands were visited by South Americans prior to Spanish. However, the theory was written off because of the absence of ceremonial vessels, graves, or any kind of construction suggesting permanent settlement.

The islands initially came into view on the maps of Abraham Ortelius and Gerardus Mercator in 1570. These were initially named “Insulae de los Galopegos” or the “Islands of the Tortoises” because of the existence of giant Galapagos Tortoises.

The first English discovery of the islands was by Richard Hawkins in 1593. The archipelago (see map ) was seen mostly as a hideout by English pirates who stole Spanish galleons, shipping silver and gold from South America to Spain.

In 1793, James Colnett described the flora as well as the fauna of the islands, suggesting that the place could be utilized as a base for the whalers working in the Pacific Ocean. The first permanent human resident on the islands was an Irish sailor named Patrick Watkins, who remained there during 1807–1809. He grew vegetables and traded with whalers before finding a boat and sailing to Guayaquil. Herman Melville, the author of the Moby–Dick fame, paid a visit to these islands, on a whaler. He recounted his experiences in one of his stories, The Encantadas, in 1855.

The Republic of Ecuador seized Galapagos Isles from Spain and then re-christened it to the Archipelago of Ecuador. Then in 1892, Ecuador renamed the place as the Archipelago of Colón. Even today, it has retained its official name; however, the islands are known by their traditional name Galapagos.

An American author named Kurt Vonnegut wrote his eleventh novel, Galapagos, in 1985. The book questions the value of the human brain from the perspective of evolution. The title is both an ode to Charles Darwin and a reference to the Galapagos Islands, where the story plays out.

He wrote that the land there, inhabited only by birds, seals, and reptiles, was “dross, worthless because it has not the power of raising a little grass, but only some thistles.”

With water sources depleted, the Bishop and crew searched the new islands for fresh water, almost entirely in vain. Frustrated, and suffering, the men resorted to crewing the native cactus for water. Disenchanted, they left the islands, but not without sending word to King Carlos V of Spain, telling of the strange and foolishly tame wildlife and the numerous Galapagos tortoises, and the name stuck.

This was the time of Spanish exploration and discovery and followed Magellan’s circumnavigation of the globe by a just a dozen years and Balboa’s discovery of the Pacific by two dozen.

Also motivated by the conquistadors on the Galapagos, another group of lost sailors dubbed the islands with another name. In 1546, a group of insubordinate soldiers of Pizzaro attempted what might have been South America’s first coup de ta. Vanquished and exiled from the continent, the upstarts had little to no nautical training and were taken, much like other animals that were also transported there, by the currents until they came in sight of the Galapagos. With their limited maritime skills, the ruffians attempted to arrive at the islands by sight. Peering through fog and carried by currents, they felt as though the islands themselves were moving, that they were enchanted and named them “Las Islas Encantadas.”

The islands soon appeared on maps. The first was a map from 1561, soon they appeared on the Dutch maps like Mercator (1569) and Ortelius (1570). The name the “Enchanted Islands” appeared on a map by Ortelius of 1589. Guerrit’s map of 1622 shows three islands identified as Isabela, Santa Cruz, and San Cristobal.

The islands appeared on the map late in the 16th century as the “Insulae de los Galopegos.”

A pirate and buccaneer hideaway – the remote Galapagos served as refuge
Not all visitors to the Galapagos Islands arrived by accident. Many used the islands into way station and ports of call.

The fabulous wealth of the growing Spanish Empire caught the attention of Spain’s European rivals, who wanted to limit Spanish power and grab some of the wealth for themselves.

During the long hostility between the English Navy and the Spanish Armada, English gave a sort of support to the Buccaneers who sacked Latin American ports and seized galleons by not persecuting them.
The Galapagos Islands lay not far from the route between the conquered Inca Empire of the Andes and Panama and New Spain (Mexico), the center of Spanish activity in the New World. These pirates used the uninhabited islands as base and refuge after raids. Establishing ports (such as Buccaneer Cove at Santiago Island), they found the islands useful for gaining occasional fresh water and stocking up on fresh food. Upon discovering that the giant Galapagos tortoises could be stacked upside down and live for up to a year without food, many passing ships went ashore to gather the fearless animals for meat during voyages. One English buccaneer, William Ambrose Cowley, drew up the first basic navigational charts in 1684. Like other buccaneers, he named many of the islands with the names of English royalty – James, Albemarle, etc. Over the years, divers have occasionally found evidence of buccaneers on the Galapagos, such as large jars found. Dive and you might discover a galleon’s precious coffers!

Learn about the first explorers and settlers of the enchanted isles

1744 – Spanish Exploration of the Islands

Although they didn’t give much importance to the Galapagos Islands in 1744, they explored them and gave some names, known as “the ancient Spanish names”, but without clearly identifying them. Therefore “Isla de la Salud” or “Santa Maria” was probably the island currently known as Floreana; “San Bernabe” the currently Isla Santiago; “Mascarin” was probably Española; “La Isla de Tabaco”, San Cristobal. Later the “Isla Santa Isabela” would be identified as Isabela. The “Islas Santa Maria” (Tortuga, Crossman), appear in several French maps. In 1744, the Geographic Source made a clearer map with several Spanish names that haven’t been conserved.

Several English whalers discovered that the whales migrated to the Galapagos Islands to breed. In 1788, the ship Emilia arrived in England with 140 tons of oil and 888 sea lion skins. Soon after, the Beaver of Nantucket (USA) returned with 1,300 tons of whale oil. It was the beginning of a virtual stampede. In 1793, Captain James Colnett arrived in the H.M.S. Rattler to study the possibilities of establishing a whaling station in the South Pacific. By the end of the century, no less than 40 whalers, English and American, frequented the waters of the Galapagos during the time of the whales to stock up on water, tortoises and sea lion skins. It will never be known how many thousands of the Galapagos tortoises were sacrificed and taken from the islands. The Sea whalers in the South Americas, though, were much more numerous than the pirates had been and some races of tortoises quickly became extinct. As many as 200,000 tortoises may have been taken over the course of the 19th century.

Hunting the populations of sperm whales in the South American seas, the whalers had lasting effects upon the islands that are still apparent today: the reduction of elephant tortoises, the near extinction of sperm whales and the unofficial Barrel Post Office on Floreana.

A tradition continued by tourists today, the office was abandoned wine cask in which outgoing sailors placed letters. Sailors returning to the port of the letters address would take it there out of kindness. While the original cask has been destroyed, the park service has replaced it and tourists today can continue the tradition, leaving postcards for friends and taking some back to send.

Among the whalers who stopped here was Herman Melville, the great American novelist and author of Moby Dick. Melville was unimpressed by what he saw, “five and twenty heaps of cinder dumped here and there in an outside city lot”, but nevertheless he wrote a short story, Los Encantadas, that took place in the islands, published in 1854. The title is the name whalers and pirates often used for the islands, the Enchanted Isles.