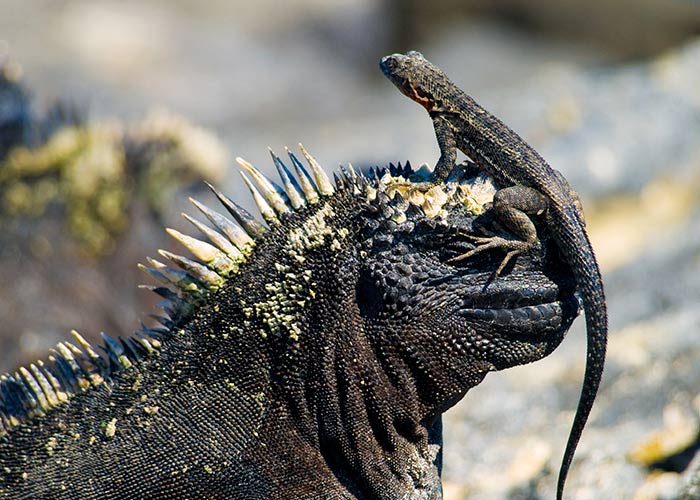 The most popular are tortoises – you also find iguanas

The Galapagos Islands are a World Heritage Site. One of the things that set them apart is the uniqueness of the animals — especially the reptiles: ninety percent of the reptiles are endemic — found nowhere else on Earth.

In 1845, Charles Darwin wrote that the Galapagos Islands seemed like “paradise” for reptiles. He was right. The Galapagos are dry and hot at the most time of the year, and there’s not much to eat. Reptiles are adapted to these conditions. Their scaly skin is effective protection against the sun, and they can find shade if they’re hot. They have a slow metabolism, being “cold-blooded,” and therefore don’t need a lot of food. The Galapagos Islands also favor reptiles due to the lack of competition or predators in the form of native mammals. In the absence of mammals, Galapagos reptiles evolved to fill available niches. This is why most of the islands’ 22 reptile species are endemic. The land reptiles are divided into four main groups: tortoises, iguanas and lizards, geckos, and snakes. The marine reptiles are marine iguanas and sea turtles.

Herman Melville (the author of Moby Dick), another famous character who visited the Galapagos in 1837, right after Darwin, had his saying on the Islands fauna:

“Another feature in these isles is their emphatic uninhabitableness…Little but reptile life is here found: – tortoises, lizards, immense spiders, snakes, and the strangest anomaly of outlandish Nature, the aguano. No voice, no low, no howl is heard; the chief sound of life here is a hiss.”

While “immense spiders” certainly are not reptiles, the Galapagos Islands are indeed known for their rich reptilian population, beginning with the giant tortoises, the “Galapagos” from which the archipelago derives its name. It was the giant tortoises, with 11 subspecies scattered about the archipelago, that first called Darwin’s attention to the amazing diversity of the Galapagos wildlife. Sea turtles also call the Galapagos home. The most commonly seen sea turtle is the green sea turtle, which is considered to be endangered throughout its range, except in the Galapagos.

Lizards are represented by three major types – the iguanas, the Galapagos lizard, and the geckos. The iguanas fall into two basic genera represented by the marine iguana and the land iguana. There are two types of land iguana, usually considered different species, although there are some data to suggest that the two are actually different races of the same species. The lava lizards consist of a single genus, Tropidurus, divided into seven species scattered among most of the islands. Lastly, there are three endemic species of snake.