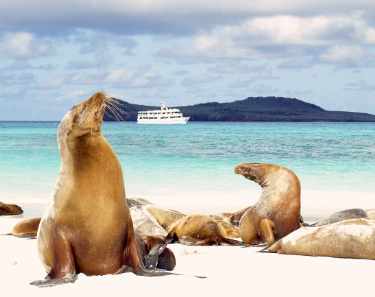 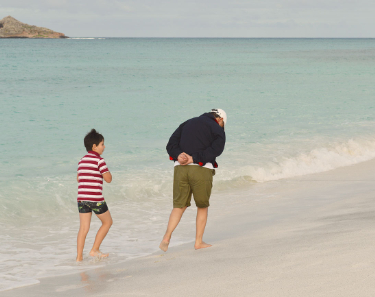 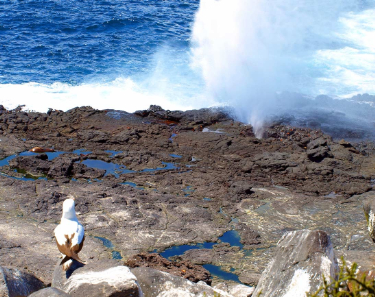 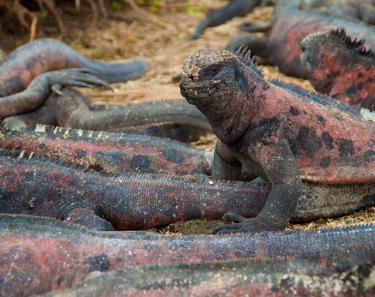 The Espanola or Hood Island in the Galapagos archipelago is the southernmost isle and is a brilliantly spectacular shore excursion site. Espanola contains a breathtaking range of fauna in its heart, although its endemic wildlife, especially the waved albatross seems to be the main attraction for tourists visiting the place.

The area is roughly around 61 sq km and the altitude stands tall at 206 meters. With 4 million years on its back, Espanola is also one of the oldest isles in Galapagos. This is a fairly flat island occasionally punctuated by some hills, built by lavas emitted from underneath the sea.

How to get there

To reach Hood, you need to join a licensed Galapagos cruise program, a 10-12 hour boat ride from ‘Isla Santa Cruz’ that lies 90 km southeast and about 2-3 hours from nearby San Cristobal. This place is best toured from the period ensuing late March till the month of December when the endemic waved albatross nests here and comes to rest. It is also possible to take a day tour from Puerto Baquerizo Moreno on San Cristobal island.

The Isla Espanola holds 2 great sites for its travelers to visit- Gardner Bay at the eastern fringes Punta Suarez situated on the western end.

The Gardener Bay is a popular tourist spot for swimming & snorkeling. Its exotic white sand beach is just the ideal cushiony base that you can rest your weight on for relaxing your mind and body fully. It is also a sea-lion colony and if you are visiting it anytime between October–December, you can catch a glimpse of the Green Sea turtles offshore as well.

Punta Suarez offers its visitors a delightful collection of wildlife, which is well worth exploring since this is possibly the best sightseeing spot in the whole of the Galapagos Islands. The 2 km stretched trail that it has houses lovely sea-lions at play; the Espanola Lava lizards; a gamut of colorful sea-birds like the Galapagos Hawk, the Galapagos Dove, the Hood Mockingbird, the large-billed Flycatcher, the Large-cactus Finch, the Swallow-Tailed Gull, the American Oystercatchers, the Red-Billed Tropicbirds; and a large number of huge marine Iguanas in action. Animals like the Fur Seals and Franklin’s gulls are also seen in this isle, but rarely.

If you are visiting the Galapagos Islands, a trip to Espanola is not to be missed. This is one of the most popular islands for bird-watching in the archipelago and the wildlife extravaganza that it offers is one of the best in the world.

Gardner Bay offers a great possibility for the visitor Galapagos Garden Ebayto enjoy some beach time in the Galapagos. Here, the extroverted mockingbirds sit on top of visitor’s hats, peck at their feet and investigate their belongings.

There is a wet landing on a long white beach, said to be the longest in the Galapagos. There is no inland trail and the beach has sea lions and possibly turtles. It is possible to see the three Darwin finch species at this site. There are some great snorkeling spots and you’ll the possibility to spot the harmless white-tipped reef sharks. The best snorkeling location is at the rock called Tortuga Island just off the shore.

Visit Española island, the southernmost land in the Galapagos archipelago, to savor the lovely colors of the iguanas during their mating season and to witness numerous seabird courting rituals. The southern shore of the Española is a blissful spot with an incredible wildlife and the only nesting site for the waved albatross. There is some kind of activity going on at every step—marine iguanas sitting against the rocks, sea lions playing in the water, night herons concealing behind the rocks, and Galapagos Hawks moving from one rock to another. There also exists the Española Lava Lizard and Swallow-tailed Gulls and Boobies among other tropical birds. It’s a world where you walk in to find yourself lost in its exotic beauty. Española has a high proportion of endemism as it is secluded from other islands.

Punta Suarez lies in the western tip of this wonderful Island, and it is also home to colonies of Blue-footed Boobies, marine iguanas, and sea lions. You will also find the fantastic blowhole that can easily shoot water about 50–60 feet up in the air. Nature lovers can treat their senses to some breathtaking sights along the cliffs.
Punta Suarez should also be visited by all globetrotters for its magnificent birdlife. There is also the Waved Albatross that comes here in summers directly from the coastal mainland in Ecuador. The huge bird leaves the islands in December as the sea temperature warms. It then looks for food, which generally lies inside the cold water.
A picturesque spot dominated by birds, Punta Suarez is a place where varied hues collide just like the sea waves against the jagged cliffs. The marvelous place is considered a really special Galapagos tour destination. A must-visit place among the Galapagos vacation cruise sites, it beckons one and all.
Listed below are some remarkable things to see and do in Punta Suarez:

There is no shortage of flights if you want to reach the Galapagos. It is fairly easy to arrange a flight from Guayaquil and Quito on an everyday basis from the Isla Baltra or San Cristobal Island Airports. There you can board your yacht or cruise ship, and it is a 3–4 hour trip from either starting point to Española.